What was New Netherland?* 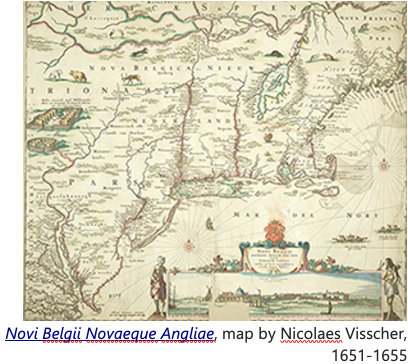 New Netherland was the first Dutch colony in North America. It extended from Albany, New York, in the north to Delaware in the south and encompassed parts of what are now the states of New York, New Jersey, Pennsylvania, Maryland, Connecticut, and Delaware.

The Dutch claim to this territory derived from their sponsorship of Henry Hudson's voyages of exploration. In 1609, Hudson and his crew sailed the ship de Halve Maen (the Half Moon) from the Delaware Bay up to the river now named for Hudson. Upon his return to the Netherlands, Hudson described what he had found: a magnificent harbor, wide navigable rivers, and a land rich in natural resources.

The commercial possibilities of New Netherland attracted considerable interest during the era known as the Dutch Golden Age, when the newly independent United Provinces of the Netherlands became Europe's leading commercial power and Amsterdam its preeminent trading city. Soon after Hudson's report was made public, merchants and investors started sponsoring speculative voyages to the new colony. In 1621, the Dutch government chartered the West India Company with the goal both of bringing order to economic activity in New Netherland and of challenging Spanish influence in the New World.

Colonists arrived in New Netherland from all over Europe. Many fled religious persecution, war, or natural disaster. Others were lured by the promise of fertile farmland, vast forests, and a lucrative trade in fur. Initially, beaver pelts purchased from local Indians were the colony's primary source of wealth. In Europe, these pelts were used to produce fashionable men's hats. Over time, the Dutch colony's economy broadened and diversified. It became an entrepôt for Chesapeake tobacco and a hub of trade between New England and the Caribbean.

New Netherland developed into a culturally diverse and politically robust settlement. This diversity was fostered by Dutch respect for freedom of conscience. Furthermore, under Dutch rule, women enjoyed legal, civil, and economic rights denied their British counterparts in New England and Virginia. Towns within New Netherland were granted the protections and privileges of self-government. New Amsterdam, thus, became the first European-style chartered city in the thirteen original colonies that would comprise the United States.

Dutch success produced many rivals, the English chief among them. Between 1652 and 1674, the two nations fought three wars. As a consequence of these wars, New Netherland came under British control in 1664. Despite this transfer of power, Dutch influence remained strong in the former New Netherland, throughout the seventeenth century and beyond; many parts of the colony remained culturally Dutch up to and beyond the American Revolution

*Information from the New York Library